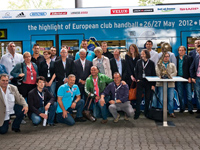 Cologne/Vienna, 6 September 2011. The new season of the VELUX EHF Champions League launched today in Cologne, Germany, the venue for the third edition of the competition s final round, the VELUX EHF FINAL4.

Cologne/Vienna, 6 September 2011. The new season of the VELUX EHF Champions League launched today in Cologne, Germany, the venue for the third edition of the competition s final round, the VELUX EHF FINAL4.

The brand new tram, which was driven for the first time at a special ceremony by Manfred Wolf, Mayor of Cologne and Michael Wiederer, EHF Secretary General will travel through Cologne for the next year, right up until the end of the VELUX EHF FINAL4 event.

Travelling on Line 1 in the city to and from the LANXESS arena daily, the tram will travel more than 100,000 km and carry an estimated 500,000 people through the City of Cologne right up to the completion of the VELUX EHF FINAL4 at the end of May 2012.

Further information and details of VIP Tickets and Corporate Hospitality Packages can be found on the event s official website at ehfFINAL4.com.

Peter Vargo, Managing Director, EHF Marketing GmbH said: “The launch of the new “VELUX EHF FINAL4 tram” will mean an even greater presence for both handball and the event over the next year in the sports city of Cologne as it transports many thousands of people to and from the LANXESS arena.

“We re expecting huge demand for tickets when they go on sale on Wednesday, tickets for last season s VELUX EHF FINAL4 were sold out weeks before the final participating teams were even known. We have invested a huge amount of time and resources into this event and I think the quality of the final product speaks for itself – a handball event fans simply do not want to miss.”

Jürgen Roters, Lord Mayor of the City of Cologne, said: “Following successful events in 2010 and 2011, I am personally extremely proud as Lord Mayor of the city that this event will return to Cologne on 26 and 27 May 2012 for the third time in a row.”

Stefan Löcher, Managing Director, LANXESS arena, said: “I am firmly convinced that in May 2012 many handball fans from around the world will return to Cologne and celebrate once more an unforgettable handball festival in the LANXESS arena and in the city.

“Already in the first two years, approximately 40,000 spectators have experienced a weekend of top class handball. This globally acclaimed tournament of the best teams once again underlines the LANXESS arena as a ‘handball temple .”

About the VELUX EHF Champions League

The VELUX EHF Champions League is the premier men s club handball competition in Europe. The continent s top 24 men s professional handball clubs compete initially in four groups of six teams, and play from September to May for a chance to be one of the four teams to qualify for the final stage of the competition, the VELUX EHF FINAL4, which will take place in the LANXESS arena in Cologne on 26 and 27 May 2012. More information available at ehfCL.com and ehfFINAL4.com.